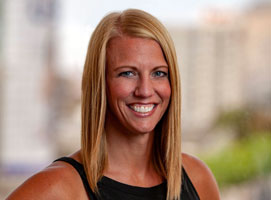 Previously, Kari served as COO at Helix Education before the company became part of RNL. In that role, Kari helped to re-image the organization, services, products, technology, and culture at Helix while improving performance and outcomes across the student lifecycle for all partners.

Kari began her career as a principal consultant at Stamats, where she guided dozens of institutions through strategic planning, brand management, and enrollment marketing initiatives. She then moved to InsideTrack, where she developed a deep acumen for student success, utilizing a coaching-meets-technology approach to improving student retention. She also served in senior sales leadership roles at Datamark and Instructure, driving their growth and expansion efforts.

Kari has a bachelor’s degree in public relations from the University of North Dakota. She is also an award-winning executive and in-demand speaker.