“RNL reminds us that good things are ahead, and that has been very encouraging. They’ve been partners in the process and given a helpful outside perspective that we don’t have ourselves.” 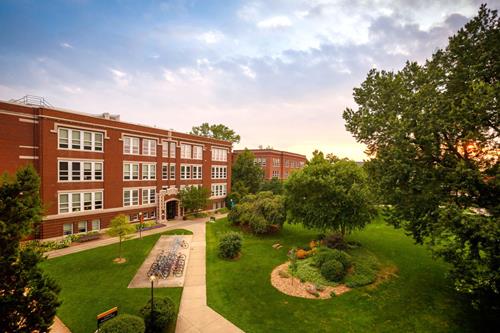 In 2014, Goshen College had faced five years of declining enrollment and net revenue when their vice president of enrollment management left. Admissions staff turnover was high, and the team began looking for a solution to remedy the situation.

“When I think back to that time, it was kind of a crisis moment for us,” said Jodi Beyeler, director of communications. “We had a very broken foundation—our processes, our data, our communications flow, training. Everything was in disarray.”

After weighing the options, the team decided to bring in Ruffalo Noel Levitz to provide guidance and direction to the new cross-divisional leadership team (made up of admissions, financial aid, IT, communications, and marketing directors), hoping for a long-term solution to build internal capacity and empower staff.

Goshen began their work with Ruffalo Noel Levitz in 2014 with RNL Recruitment Consulting to get them on the fast track to success. It was an intense year of rebuilding their foundation, eventually adding assistance with student search. The next year, the college decided it was time to invest in RNL Advanced FinAid Solutions and RNL Demand Builder in order to cultivate their inquiry pool.

Being one of the few Mennonite-affiliated colleges in the United States, Goshen found that their main competitors were actually not primarily other Mennonite-affiliated institutions, but rather colleges and universities—especially publics—within 100 miles of campus. Changing that perspective gave Goshen a new mindset for recruiting. Now, Goshen is working to grow diversity, reaching an increasing number of Latino/a students.

No single strategy has been the complete solution for Goshen, but rather incremental changes over time, including:

Goshen’s openness to change and dedication over the past few years has led to the following results:

With optimism and high morale, the Goshen team enrolled their largest incoming class in eight years to their goals for 2017 while maintaining class profile.

“In this process, we have torn down some of the silos that are common in higher ed and on our campus,” Beyeler said. “Bringing together leadership to solve the same problems has been really important, especially in becoming more data-informed. RNL reminds us that good things are ahead, and that has been very encouraging. They’ve been partners in the process and given a helpful outside perspective that we don’t have ourselves—especially on where we stand in the larger landscape.”

Get a personal tour of RNL Complete Enrollment, the industry’s only comprehensive solution for building your strategic roadmap and recruiting and retaining the right students. It delivers the research, data, expertise, analytics, and technology to sustain success across all areas of enrollment.