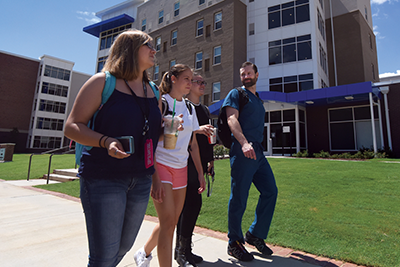 The challenge was daunting as the two universities could not have been more different. One was a highly selective university and the other operated on an open-access model. The end result was that AU became the fourth research institution in the University of Georgia System, a major culture change especially from the open-access side.

In addition, not only did AU want to grow enrollment, it aimed to increase both admissions standards and tuition to reach R1 research institution status. After considering multiple partners, they chose Ruffalo Noel Levitz (RNL) to gather the additional resources and capabilities needed to achieve these very lofty goals.

AU started with RNL Applicant Cultivator in 2016 to craft a strategy that would generate leads and build a larger, stronger, and more diverse applicant pool.

With the combination of RNL advanced analytics, multichannel marketing campaigns, and real-time data along with a strong partnership with campus, AU was able to enroll a larger class and boost academic quality.

As enrollment continued to grow, so did the need for additional classes and campus infrastructure to support the increase in students. AU built a new residence hall for freshmen in 2016, and as growth has continued to trend upward, the campus is now looking at additional campus improvements to capitalize on this growth, make the institution more competitive for students, and provide additional resources to support student success.

“Even though we had double-digit increases last year, the administration thought maybe that was a fluke,” Barron said. “I could see that the numbers were real coming for this fall, and so I had to let the provost know, and the administration, we need to plan on this. We need to hire more faculty. We need to have the classes. This is real. This is not an anomaly. I can follow the number trajectory.”

Barron was ecstatic but also astonished by the results. “Even when I’m looking at the numbers, I said, ‘This is crazy.’ I’ve been in enrollment for 22 years. I’ve never seen these kinds of numbers. I’ve never seen this kind of growth—especially in a contracting market.”

The changes in enrollment, academic quality, and diversity have given Barron a great deal of satisfaction as he and the rest of the AU staff are not only meeting their goals, but fulfilling a higher mission for the students they enroll.

“When people say, ‘What is your job?’ I don’t tell them I am the AVP of this institution,” Barron said. “I say I provide opportunities to students, opportunities for people to reach their educational dreams, transform their lives, and be productive members of society. That’s the joy I get out of it.” 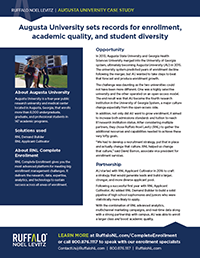 Get a personal tour of RNL Complete Enrollment, the industry’s only comprehensive solution for building your strategic roadmap and recruiting and retaining the right students. It delivers the research, data, expertise, analytics, and technology to sustain success across all areas of enrollment.