How many of your second-year students haven’t settled on a major yet? 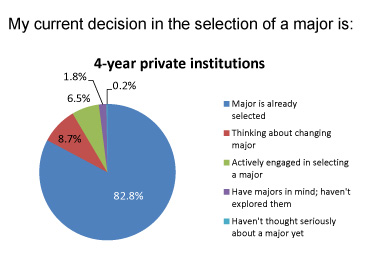 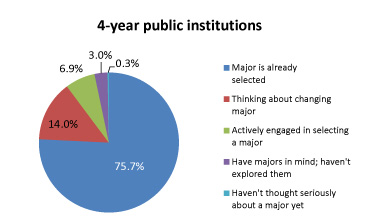 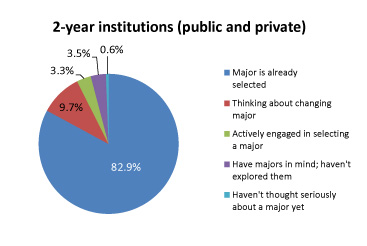 The above data show 17 to 24 percent of second-year college students nationally haven’t settled on a major as their second year gets under way, based on our 2011 National Pilot Study: The Attitudes of Second-Year College Students, released earlier this year (see page 18 of the report).

As the above charts show, these students are either thinking about switching majors, are actively selecting a major for the first time, or haven’t gotten serious enough yet to begin exploring majors or even to give the selection of a major much thought.

The proportions of second-year students that haven’t fully settled on a major may actually be much higher, however.  In a separate item in the same study, the same students were asked to indicate if they would like assistance with selecting an academic program or major, with these results:

In addition, 56.1 percent of these students overall, across institution types, indicated they would like help with exploring advantages or disadvantages of their career choice.

Whether or not a major has been selected, the study also found a significant increase in interest among second-year students across institution types in receiving assistance in activities that support the attainment of a major:

How do your institution’s second-year students compare on these metrics? How do their needs differ from those of students nationally? And how do you use this kind of information on your campus to best support your second-year students’ success and enhance their completion rates?

Beginning this fall, Noel-Levitz is offering a Second-Year Student Assessment™ with consulting support that can help answer these questions and many others.  Learn more here.

How Are Campuses Adjusting Their Enrollment Strategies During COVID-19?...

Moving on From Your OPM: A Campus Success Story