We also know that considerable attrition continues to occur after the first year: 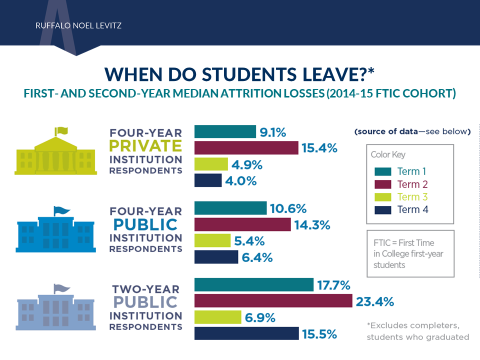 How can colleges and universities stem these losses and increase student persistence? By taking specific steps to increase second-year student success.

Earlier this fall, we hosted a webinar, “The Case for Extending Your Student Success Program through the Second Year.” Our featured speaker was Jonathan Fries, director of Second-Year, Transfer, and Non-Traditional Programs at the University of Lynchburg (formerly Lynchburg College). Jonathan’s message about the importance of paying attention to your second-year students, and his many examples of how he is using data to guide programs and practices, was so compelling I wanted to share the presentation with you.

Jonathan and his colleagues at Lynchburg developed an intentional second-year experience program that has seven elements. I am going to discuss the first four parts in this blog. 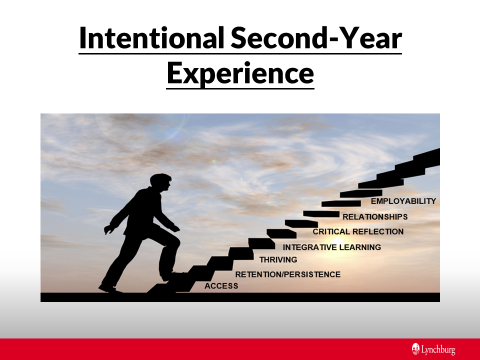 Step one: Gather data and research:

Jonathan uses the RNL Second-Year Student Assessment (SYSA) to lay the foundation for second-year initiatives.  By using the SYSA, he and his colleagues are able to tell:

As a result of these data, Jonathan and his second-year team conducted 1:1 meetings with students at risk for leaving before graduating, alerted advisors of students who are in the process of changing majors, developed programs that directly address the top priorities of second-year students, and expanded the leadership development program to capture these second-year emerging leaders.

Jonathan and the other members of the “second-year student success team” have taken steps to use the data available to them to create partnerships to serve second-year students. Examples of programs they have developed (or re-purposed for this audience) include:

The second-year student success team at Lynchburg embraced a strong assessment plan that has three phases:

Speaking of outcomes, Lynchburg is seeing a strong return on investment for these efforts. National data suggest that the benchmark for second-third year attrition should be about half of the first-second-year attrition rate. For example, if an institution loses 20 percent of their students after the first year, a reasonable expectation would be that they lose an additional 10 percent after the second year. Jonathan reports that they are on track this year to only lose 6 percent of their second year students. That improvement of 4 percentage points translates into more students, greater revenue, and the potential for improved four-year graduation rates as well.

I will share the other three steps in my next blog, but I encourage you to click here to watch our hour-long webinar, “The Case for Extending Your Student Success Program Through the Second Year.”

And if you’d like to learn more about how to increase success among second-year students, see all the details about the Second-Year Student Assessment (SYSA), or email me. 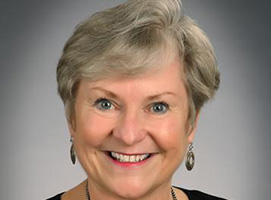 Reach Mari by e-mail at Mari.Normyle@RuffaloNL.com.

Filtering Out “the Noise” and Creating an “All In” Approach:...

Are First-Year Students Receiving the Support They Need?

Assessing Student Satisfaction Is More Important Than Ever