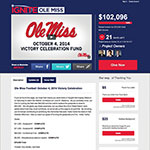 On Saturday, October 4, 2014, the University of Mississippi football team defeated the University of Alabama, 23-17, to give the Rebels victories in their opening five games of a season for the first time since 1962.

Following the game, many fans in the sellout crowd went onto the playing field and tore down the stadium’s goalposts in celebration of the win. These acts resulted in $75,000 in unanticipated expenses to Ole Miss Athletics: a $50,000 fine from the Southeastern Conference (crowd control policy) as well as another $25,000 in expenses simply to repair the playing field and replace the goalposts.

That night, just a few hours after the victory, Ole Miss Director of Athletics Ross Bjork tweeted a photo of the celebratory crowd with a lighthearted message saying “Everyone in this picture should send donation to rebelgiving.com. All donations accepted for the post & fine!” 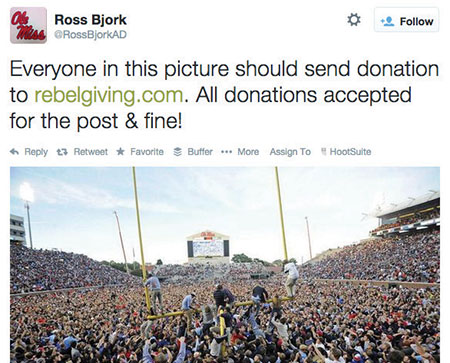 What started out as a fun tweet on a Saturday night became an incredibly successful crowdfunding campaign and generated significant dollars and donors as well as immeasurable positive media exposure over the next 100 hours!

By the afternoon of October 8, less than 100 hours after the conclusion of the game, Ole Miss had generated more than $100,000 from more than 840 donors – an average gift of approximately $120 per donor, and well above the $75,000 in unanticipated expenses directly resulting from the on-field victory.

“We were going to pay all of this no matter what, and it was worth it,” said Ole Miss athletic director, Ross Bjork, to ESPN.com regarding the $75,000 in expenses. “This wasn’t all about the money. It was about the connection and the cause and tapping into the emotion from the big win.”

Ole Miss leveraged the “Victory Celebration Fund” campaign through popular gamification enticements easily created (and highly recommended!) through ScaleFunder, a RuffaloCODY crowdfunding platform. These included everything from a thank you letter from the athletic director, to a commemorative print, to actual pieces of the goalposts ($500 and above). In fact, the goalpost levels proved to be so popular, Ole Miss had to convert some of their larger pieces into smaller pieces in order to meet demand!

On the afternoon of October 8, Ole Miss Athletics launched a previously planned crowdfunding campaign entitled “I Wear 38,” benefitting an endowed scholarship fund created in 1989 and named after a former player (Chucky Mullins) who wore uniform #38 with the Rebels, but was sadly paralyzed making a tackle during a 1989 game and passed away less than two years later.

Again, leveraging the ScaleFunder platform, Ole Miss incorporated video and other social media opportunities to generate more than $113,000 from more than 150 donors in a matter of hours!

To learn more about the ScaleFunder crowdfunding platform from RuffaloCODY, visit www.scalefunder.com to schedule an online demo.