Labor Day weekend marks the opening of the 2014 college football season.  For many colleges and universities in the United States, football Saturdays are some of the most visible days of the entire year and can provide a common rallying opportunity for all alumni, regardless of whether he or she is a big sports fan.

But does a win or loss immediately impact phonathon results?

Several of our regular RuffaloCODY fundraising bloggers have strong affinities to major college football (including one who used to work within collegiate athletics), so we decided to run some stats to find out.

We investigated non-donor calling stats for: 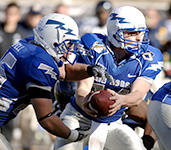 What does it all mean?

1. Alumni may love their football, but they also can separate the final score on Saturday from the need to support their institution.

2. While the average gift may vary, you’re not going to see a major impact from wins or losses on dollars raised from your non-donors

3. Enjoy the game this weekend and don’t fret about the impact on your phonathon on Sunday.