When it comes to fundraising on the phone, phonathon average pledge is an important metric.  We use it in program planning and forecasting, we use it to determine suggested ask levels or gift arrays, and we know it can really affect dollars raised and ROI.  In some cases, universities have even focused on lowering the phonathon average pledge in order to increase response rate and increase donors: all to drive the important institutional metric of alumni participation.

But if you really want to increase participation, you also need to retain donors in the second year and beyond. As we consider suggested donations levels, an interesting question comes up:  What do average pledge numbers actually tell fundraisers about donor retention? This could be important especially for those first-time donors we have worked so hard to acquire. As it turns out, average pledge sheds a lot of light on the retention question.

To really dive into the numbers, I collected non-donor data from a variety of university phonathons. Data came from 72 RNL higher education phonathon programs, with 95,899 first time pledges in fiscal year 2015. I included a mix of small, medium, and large public and private institutions from all over the US.  I then narrowed the group to only those records where we attempted to contact the individuals again in FY 2016. This left me with 59,782 making a pledge in 2015 that were solicited by phone again in fiscal year 2016.  I used this data to see how average pledge in 2015 might impact the retention of those prospects in the 2016 fiscal year.

To help visualize the data in this study I decided to break the pledges into ranges. The distribution of gifts was predictable. The first-time pledges from fiscal year 2015 came in all sizes, with a majority of the gifts clustered into the $50-$99.99 range.  As we would expect, the smallest number of pledges came in at the extreme low and high values. Here is a quick look at the distribution of both the 2015 acquisition pledges and the 2016 renewal pledges, showing a similar spread in the groups: 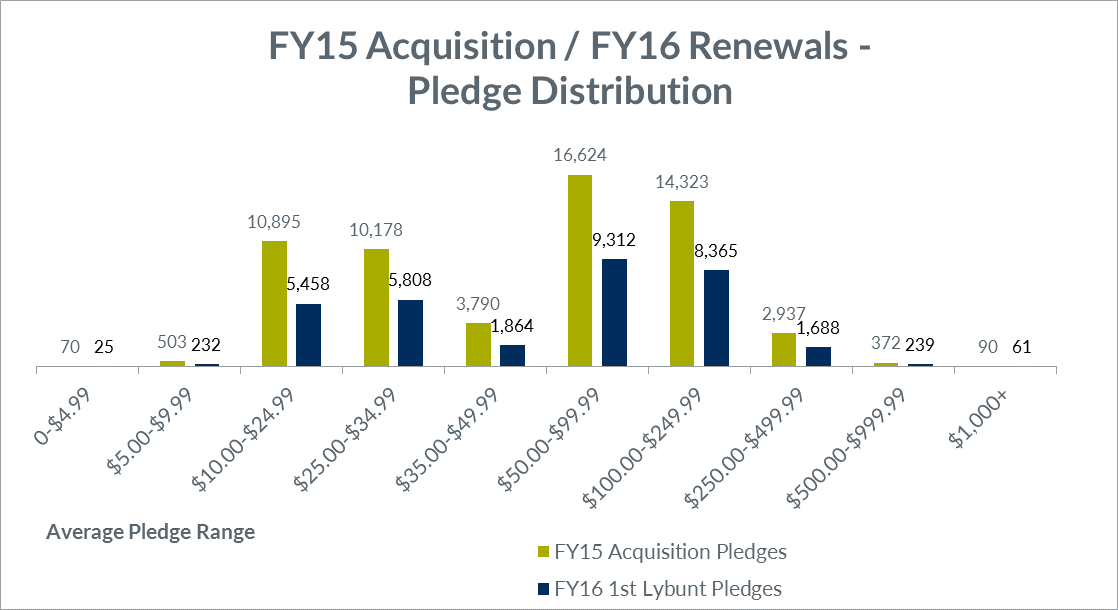 Overall, we saw a retention rate of about 55.29% for these first-time pledgers, so 33,052 of those prospects made a renewal pledge in the 2016 fiscal year.  This was a great retention rate, about twice the retention rate of 24% for all first-time donors for higher education. This proves that phonathon continues to be a great driver of donor retention.

For these programs, most of the gifts came in between $50.00 and $250.00. Fortunately, that group had great retention rates as well, especially considering these are all first-time donors.

As we all know, phonathon can be a great fundraising tool for both acquisition and retention. It can be used in a very focused way and it can also be used as an appeal to nearly every prospect in your Alumni base, even those Millennial prospects, as I talked about in my last post.

Even if the goal is to raise alumni participation and to keep those donor counts growing, gift size can makes a difference. Before you decide to boost your participation this year with smaller asking levels or token level pushes, it would be a good idea to look at your data and see if that strategy makes sense for long-term sustainable growth. The best strategy for your organization is likely going to be seeking gifts that are a significant investment for your donors, but still provide relative ease in giving for a first-time donor. Finding the right balance is more than a year one money-maker. It also drives future retention.

In business, it is understood that in order to grow you have to retain what you have.  The same is true in fundraising.  Make sure you are maximizing your precious resources and finding the donors that will give year after year, not the ones that make one gift and disappear.  Based on this study of nearly 60,000 pledgers, the secret to solving that puzzle could very well be asking for a little bit more.

To engage a Ruffalo Noel Levitz expert to bring this and other important strategies into your phone program and multi-channel engagement program, drop us a line today. We’re ready to take your program to the next level.

What Are Your Mid-Year FY23 Fundraising Results? Tell Us in...

If You’re on the Fundraising Texting Fence, It’s Time to...