As the guy over here who has put on a lab coat to make a presentation on the science of giving, I fully embrace my inner nerd. We need to bring the best of science: psychology, sociology and human behavior theory to our work as fundraisers.

Here are two ideas I return to a lot when I think about giving and two nerd-tacular pieces of proof that show they are working. (No lab coat is required).

Giving is an extraordinary act. It’s also what everyone is doing.

Look at some of the biggest charity splashes of the last 40 years: things like We Are the World, the Ice Bucket Challenge, Relay for Life, Race for The Cure, Crowdfunding. What they all have in common is a social connection right along with that personal act of generosity. There’s a reason why you get to put your name on the sign you buy for a buck at the checkout to support a cause.

Normative behavior is something we do because everyone else is doing it. It is an amplifier of personal generosity. As one student caller I interviewed last year put it when asked how he feels about asking for money:

“It was a little strange, but once you ask a few times, it seems natural. People give all the time.”

The strategy of engaging the pull of normative behavior requires connecting with donors on a personal level, sharing people who are like them who have contributed, and amplifying what is commonly called the “bandwagon effect.” Crowdfunding, Give Days, matching challenges and even old-school campaigns really take advantage of this effect.

The most personal solicitation methods like phonathon, volunteers and personal visits bring normative behavior home in a big way because they involve people talking with people. The bandwagon needs a driver.

Incremental behavior is learning the habit of doing something over time. We often refer to our annual giving programs as “incubators” for major gifts. They are. Examples of a big gift coming from a lifetime non-donor or someone totally disconnected with an organization are pretty rare. Most big supporters get involved over time, and generally increase their support as their affinity and capacity also increase.

Donors need some kind of ramp, long or short, to get to their ultimate gift.

The concept of incremental learning is big with educators, as well as with scientists who are trying to model the human brain. To quote one study:

“The incremental approach evolves more effective and more general behavior, and should also scale up to harder tasks.” 1

Substitute “big gifts” for “harder tasks” in that sentence and you’re looking at something very true about the link between annual and major giving. Saying “yes” to a phone or mail solicitation: pretty simple. Documenting your estate plan: pretty complex.

If you don’t get donors started and keep them giving regularly, you will have fewer big gifts down the road.

Proof: The Ramp Up

Big donors don’t just appear. The Nonprofit Research Collaborative just confirmed again that 75% or more of planned givers have been annual donors, something we have known for years.

Using the full giving data for 40 years at 8 institutions of higher education, we took a look at how many times donors who ultimately gave $25,000 gave prior to that big gift: 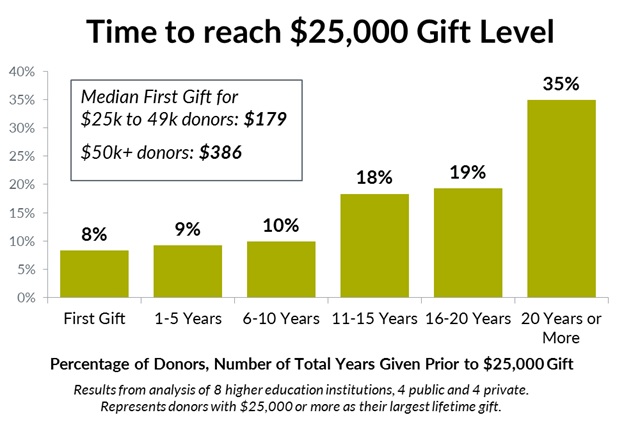 Almost three quarters of $25k+ donors gave 11 or more years prior to the big gift. For the $25-50k givers, their median first gift was just $179. That sounds like a pretty common phonathon, crowdfunded or online gift to me. 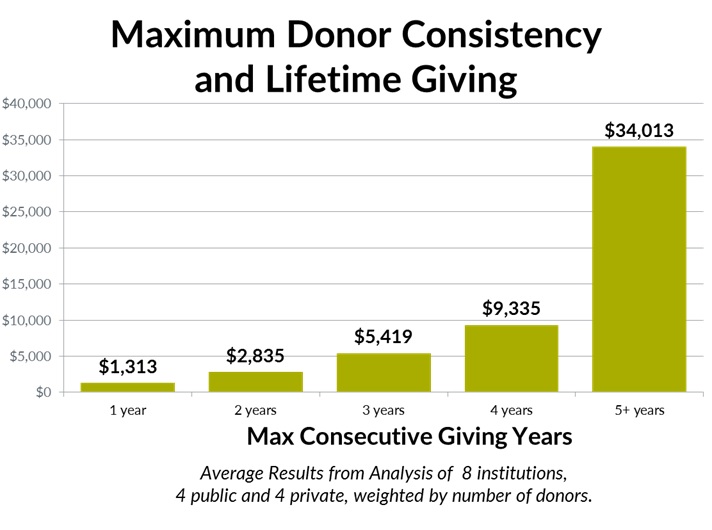 This data shows that even year to year giving consistency in even relatively short stretches makes a big difference–a big jump in total lifetime giving with consistency of 4+ years.

I used to be a big proponent of “every year” giving societies. I’m less excited by them now—the world is simply too turbulent to expect every loyal donor to give every year to be called “loyal.” Start a loyalty circle based on total years given if you don’t have one, and shift your strategy to catch “falling stars” –loyal donors who are about to lapse–rather than trying to catalog the entire universe.

The idea is to be a regular part of a donor’s life. We have ample evidence that your annual program will be healthier and you will be rewarded with more major and planned gifts down the road if you focus on consistency.

It’s not just today’s gifts you’re getting with your phonathon, personalized direct mail and crowdfunding. You are literally growing a group of future major donors.

So, take a look at your data, think about what behavior you are asking for and rewarding, and don’t be afraid to nerd out in your work to engage donors. If you can make a personal connection with the donors who are learning over time to make giving part of their life, your cause will be rewarded exponentially.

This post builds on insights from our RC360 fundraising analysis program and ideas shared in our recent white paper on the value of robust phonathon programs. Take a look and let us know what you think. 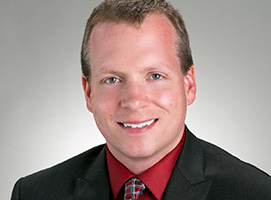